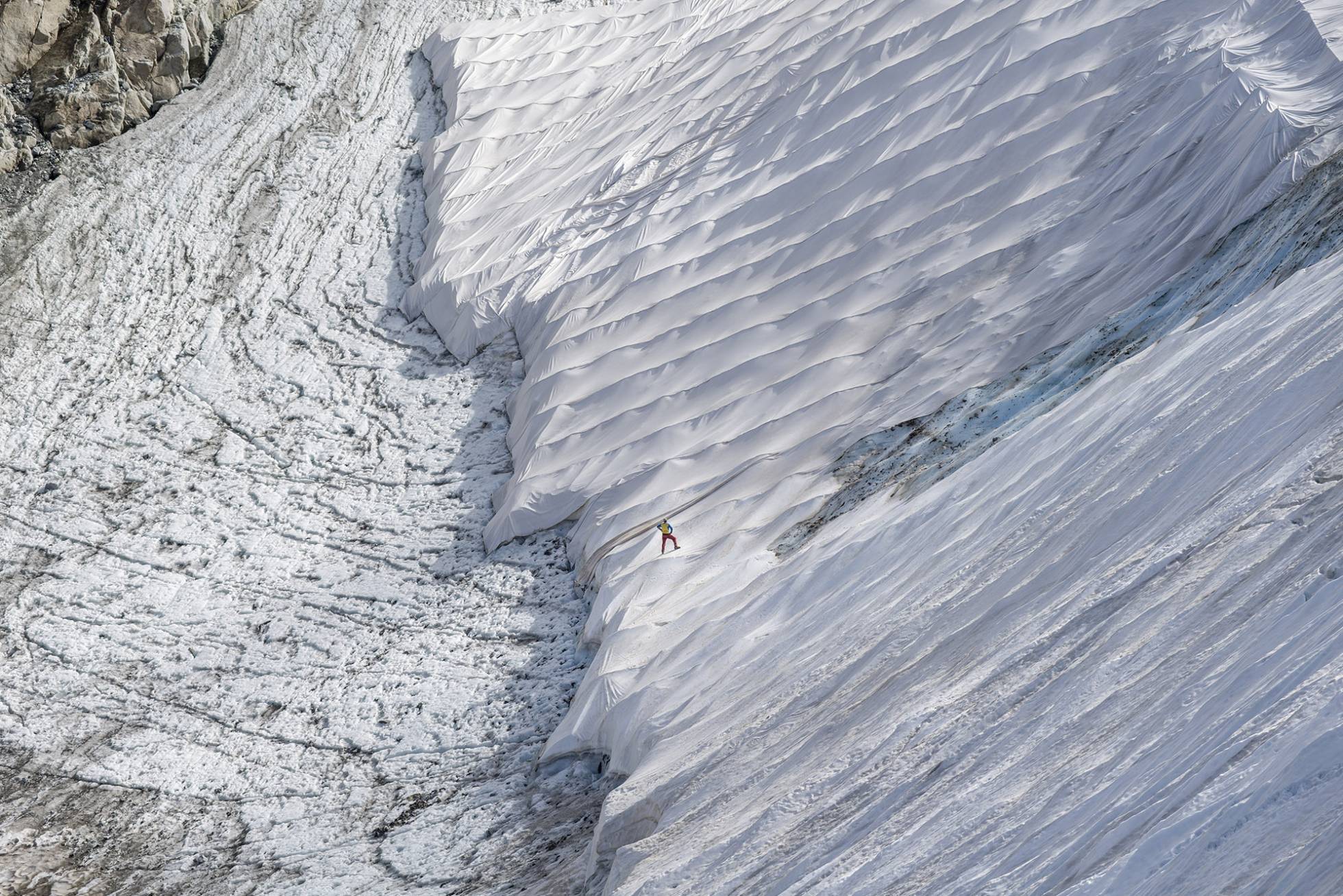 Envolver 100,000 meters squares of a glacier in summer with a kind of white thermal blanket to protect it from the increasingly high temperatures and prevent it from disappearing. The idea may seem unrealizable, but it has been carried out every year since 2008 on the Presena glacier, which rises to 3,090 meters in the Italian Alps, between Trentino and Lombardy.

The aim is to stop the thaw of the formation – a dynamic frozen mass whose lower part flows like a river – which since 1993 has lost almost a third of its volume, and to preserve the ski slopes, a source of wealth in the area.

The system allows them to save three meters of ice height a year in covered areas and has prevented the glacier from splitting in two. A relative success, because although deterioration has slowed, its regression continues unstoppable.

The environmental disaster faced by these moving ice sheets, of which climate change is the culprit, is observed all over the planet and has increased in the last three decades. But its deterioration is prior.

From 1961 to 2016, more than 9.6 billion tons of ice melted in the world, both from frozen surfaces and from glaciers. And this water is responsible for an increase in sea level in that period of up to 27 millimeters – which represents 30% of the three millimeters that the ocean grows annually – revealed in 2019 a research carried out by an international team of scientists who led the University of Zurich (Switzerland).

“Globally we lose around three times the volume of ice stored in all the European Alps. Every year! ”: This is how glaciologist Michael Zemp describes the magnitude of the debacle,

With these data, more than a third of the world’s glaciers may have disappeared by the end of this century. The projections for the Alps are similar and scientists maintain that the volume of its glaciers could suffer a 90% decrease in 2100.

In view of this scenario and in an attempt to slow its death, each June for 12 years the Presena glacier change its natural white layer for another plastic, but similar in appearance.

The project was born because the alpine formation was cracking and rocks were beginning to emerge in the middle. “By covering it we have prevented it from cracking and turning into two small glaciers instead of one, doomed to disappear very quickly because the rocks retain the heat of the sun and accelerate the thawing process”, they specify from the Carosello Tonale company.

Initially, they had the financial help of the province of Trento and the scientific collaboration of the Universities of Trento and Milan, which monitored the glacier until 2014, when the project ended.

From that year on, the company took over the operation. The fabric used has a cost of two euros per square meter. “We use it for two years and then it is renewed. The amount is 350,000 euros adding snow production “,

It takes the team a month and a half to complete the work, which consists of unfolding the thousands of meters of white fabric – at the beginning 40,000 square meters were covered and now there are 100,000 – at a height of between 2,700 and 3,000 meters.

As if they were shaping a puzzle, the technicians conscientiously fit and sew the huge remnants, 70 meters long by 5 meters wide, in addition to fixing them with heavy sandbags to prevent the wind from pulling them away. As the color is white, the alpine enclave retains its harmony.

The glacier remains like this, entrenched in this coverage, until September, when autumn arrives and the time to discover it, waiting for the winter snowfalls and the start of the ski season.

The company uses “geotextile canvases that reflect sunlight, maintain a lower temperature than the outside and, therefore, preserve as much snow as possible,” they explain in the Italian firm. Research from the University of Milan found that “on average, the solar energy absorbed by the covered part was 36% and 56% in the uncovered part”. And the less radiation that penetrates the glacier, the less it melts.

“Covering a glacier is not a definitive solution, it is punctual for certain places where there are tourist areas, skiing is practiced or you want to protect a certain area”, comments Jordi Camins, glaciologist and member of the Group of Experts on Climate Change in Catalonia ( GECC).

The fabric reflects solar radiation without being absorbed by the ice, in such a way that the fusion effect produced by the solar rays is avoided. “In some way, a natural process is being copied, the albedo effect [the amount of solar radiation that is returned to the atmosphere after hitting the Earth’s surface].”

On white surfaces, the albedo is very high and absorption is minimal, most of it is sent to space. A physical phenomenon that can vary due to global warming, above all due to the melting of the Arctic ice pack (seawater that freezes in winter and two-thirds of which melts in summer).

“If there is more thaw, the capacity of the ice pack to reflect radiation decreases and it will be the sea that absorbs more heat, which will produce an increase in temperatures and greater melting. They are phenomena that feed off each other ”, Camins says.

Italy is not the only place where this measure has been used. In Switzerland it takes place on the Rhone glacier, where the river of the same name is born.

“A language is protected because an ice cave is built for tourist visits and it has to be maintained,” says Camins. In France, on the famous Sea of ​​Ice glacier in Chamonix, only a small area is covered to prevent people from getting wet when they visit the grotto that is excavated every year.

“It is not a solution to store them under plastic”, confirms Nacho López Moreno, scientist at the Pyrenean Institute of Ecology of the Higher Council for Scientific Research (CSIC).

The growth of a glacier depends on its mass balance, “the ice that accumulates in the cold season and what melts in the warm season, and if it loses more than it conserves, its volume is decreasing.” Presena is an example of the shortcomings of the system.

Photographer Michele Lapini, author of the images that illustrate this article, explains that “the gradual and slow loss of terrain is extremely visible when looking at the photographs of the glacier from a few years ago.” This work by Lapini is part of the climate change documentation project in Italy in which he has been immersed for years.

What would the loss of these glaciers imply? “It depends on where they are on the planet, what their extension is and the link between the human groups of meltwater,” explains Camins. The retreat is very severe in all the mountain ranges of the world and the Arctic, but those that are on the mainland in Antarctica are very stable “and some grow in thickness”.

Something very important because they contain 90% of the glacial ice in the world. The problem in Antarctica, where the temperature has risen but still has low values, is found in the ice shelves (frozen tongues from glaciers) that are introduced into the ocean. “As the sea is warming, they collapse when they submerge”, specifies Camins.