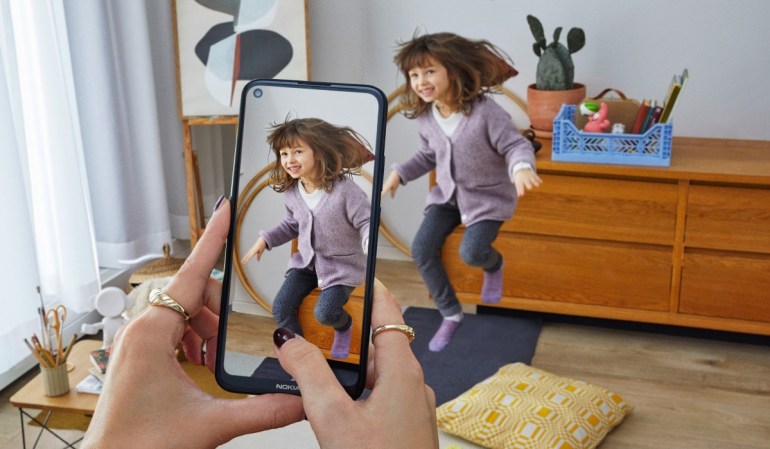 Nokia has presented two mobiles of different ranges, specifications and prices. On the one hand we have the Nokia 5.4 with improvements in its cameras, battery, polycarbonate body and a promise of 3 years of updates, and on the other hand the Nokia C1 Plus an entry-level mobile perfect for basic use for 69 euros.

The name of Nokia perhaps no longer sounds as much as it used to, and more so in the telephony market where other big brands get all the attention. Far from disappearing, HDM Global has launched two new Nokia brand terminals and we know all their details.

Two different terminals that are focused on a different audience as well. The Nokia 5.4 is a mid-range model with a 6.39-inch IPS screen, four cameras, a 4,000 mAh battery, and Snapdragon 662.

This new Nokia terminal brings a 6.39-inch IPS LCD screen with HD + resolution and has a selfie camera embedded in the screen, Snapdragon 662 processor, 4,000 mAh battery via USB C cable and a charging speed of 10W , 4 GB of RAM and 64 or 128 GB of ROM expandable via microSD, headphone jack, Android 10 and with a promise to keep the terminal updated for 3 years.

Regarding the cameras, the Nokia 5.4 brings 4 rear cameras where its main sensor is 48 Mpx, 5 Mpx ultra wide angle and two 2 Mpx sensors, one for macro and the other for depth . Its selfie camera is embedded in the screen and is 16 Mpx.

As for its price and availability, it will arrive in Europe in the coming weeks and we can buy it from 189 euros. The available colors are purple and blue.

Basic mobiles are characterized by having a RAM of less than 3 GB, little internal storage space, a somewhat fair processor to install games as it can be done in a mid-range mobile and cameras well below other models.

In the case of the Nokia C1 Plus we have Android Go, it is a reduced version of the Android operating system that is installed on less powerful mobiles. In turn, this terminal has a 5.45-inch screen with HD + resolution, a 2,500 mAh battery, 1 GB of RAM, 16 Gb of ROM , a 4-core processor, a headphone jack, a 5- inch rear camera. Mpx with LED flash and a selfie camera also 5 Mpx.

Regarding the price and availability of this mobile, we see that Nokia is going to launch it in Europe in this month of December and has a price of 69 euros . The colors we have to choose from are red or blue. Cheap mobile phones are still a focus of Internet searches and the truth is that there are countless models below 200 euros and that they are very worthwhile.