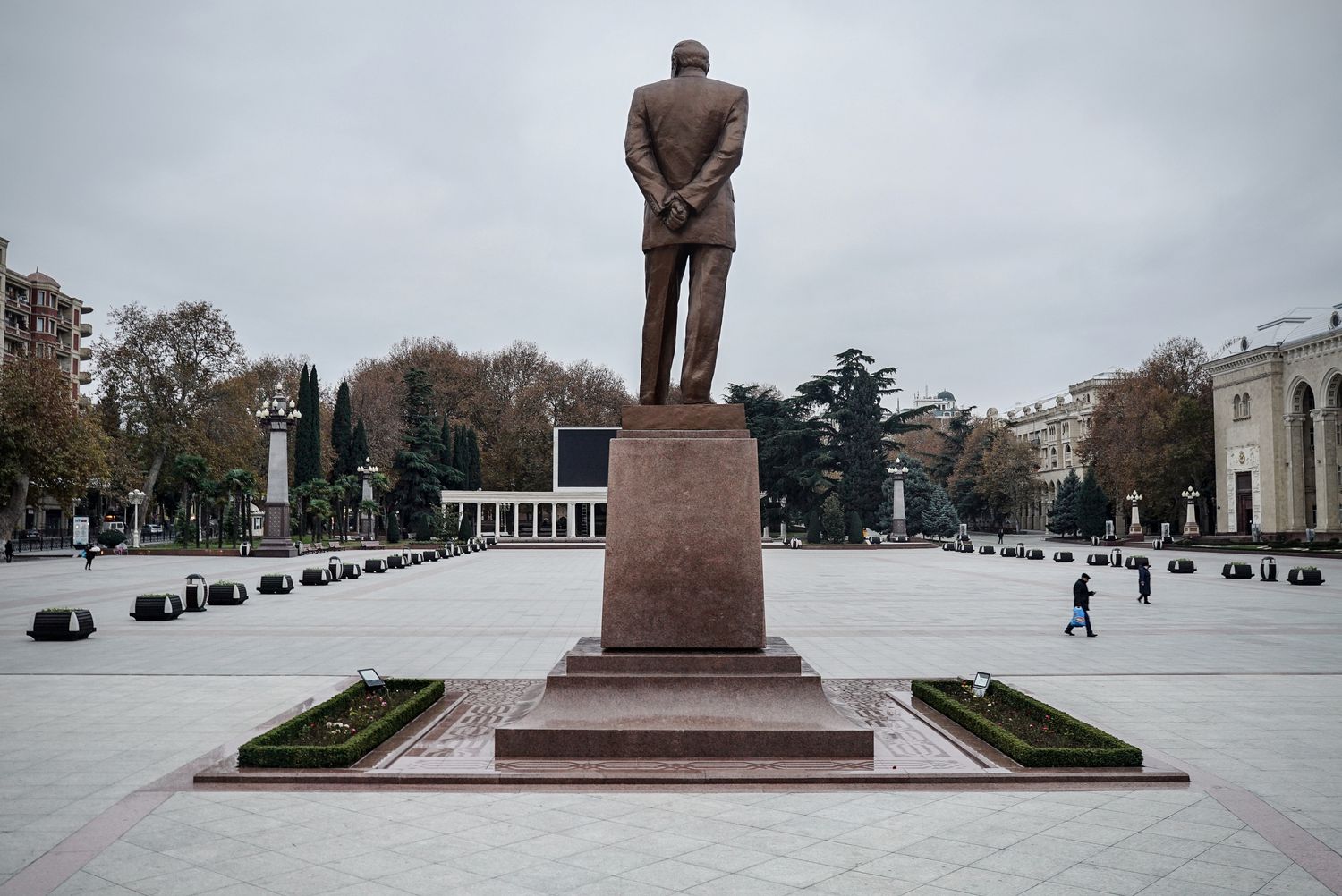 Along the promenade, on the shore of the Caspian Sea, Baku’s skyline resembles a small Dubai, with its towers of steel and glass. From there, an expanse of Parisian airs opens up, witnessing the first oil boom , on horseback in the 19th and 20th centuries, when the Rothschilds and the Nobels settled their buttocks next to this sea rich in hydrocarbons and caviar.

The city continues in an increasingly monotonous succession of tall apartment buildings and, beyond the capital, the towns are of low houses and tin roofs, not miserable, but very humble. If in the center of Baku, the capital of Azerbaijan, high-end vehicles are part of the landscape, the king of rural roads is still the old Soviet Lada.

There can be no more contrast between these two worlds withinAzerbaijan , but there is something that unites them: the omnipresence of posters, banners and lights with the face and name of the president: Ilham Aliyev, the man who came to power in 2003 after the death of his father and predecessor, Heydar Aliyev .

Since then, he has ruled with an iron fist this key country for Europe’s energy supply and which, as the journalist Thomas Goltz described, “has been cursed with the two greatest corrupters known to modern man: war and oil.”

If the defeat against Armenia in the fight for the Nagorno Karabakh enclave 27 years ago brought the Aliyevs to the government, the victory in the repetition of that war last fall consolidates them as a dynasty.

“It has been a total success for Ilham Aliyev, it has made him very popular even among the opposition and civil society,” explains Azerbaijani journalist Arzu Geybulla: “If he held elections right now, he would win without resorting to fraud.”

The early 1990s were tragic for Azerbaijan. Efforts to escape the orbit of Russia and build a parliamentary democracy were joined by the Nagorno Karabakh conflictwith the Armenians. A war waged not by a national Army, but by a coalition of militias whose commanders frequently withdrew them from the front to march on Baku to engage in politics by force of arms.

Heydar Aliyev, who had ruled communist Azerbaijan in the 1970s before marching to Moscow to higher positions, waited with strategic patience while his rivals beat each other until, in 1993, he seized power, promising a return. to law and order.

“Those times were chaotic and it was an existential moment: to be or not to be as a country. So we are committed to having a strong state, ”explains a source from the Azerbaijani presidency.

With his expertise as a politburo man — and it took a lot to reach the top of the USSR coming from a peripheral, Muslim republic — Heydar Aliyev forged a pact between new nationalists, old apparatchik and the nascent oligarchy. It stabilized the country.

In foreign policy, he also knew how to make bobbin lace: he maintained preferential relations with Turkey, even after dark elements of the Government in Ankara tried to carry out a coup ; signed an association agreement with the Moscow-led Commonwealth of Independent States while strengthening its alliance with the United States and European countries, and established close ties with both Iran and Israel.

This garnered not a little popular support for him, although, from a certain point on, it ceased to matter. The elections became a mere formality, won with implausible percentages. With these wickers the current president, Ilham Aliyev, 59, continued to rule when he inherited the leadership in 2003.

The second oil boom helped reduce the poverty rate from 50% to 5% of the population and keep people happy. the oligarchs.

The new president thus became the “key vault” that sustains the Azerbaijani system, in which a few families share political and economic power, writes historian Audrey Altstadt, but he also increased repression against any attempt of political opposition or media criticism, perhaps due to his own insecurity for lacking the authority of his father.

In the center of Baku, in those hyper-modern towers, many of its apartments are kept artificially empty. It does not matter too much to rent them. They are, some denounce, the supposed proof of corruption: the way to convert illicitly obtained funds into assets.

“Azerbaijan today is run in a similar way to feudalism: a handful of well-connected families control certain geographic areas and certain economic sectors,” reads one of the Stratfor Corporation platform messages revealed in 2012 by WikiLeaks.

These oligarchs are not traditional businessmen, but families whose mainstay for enrichment is one of their members with a state position.

“In the last decades many things have improved in Azerbaijan, what has not changed is that a single political force controls the entire Administration, from the Government to the municipalities,” denounces human rights activist Anar Mammadli. “In a way, it is a continuation of the oligarchy of the Soviet period,” he adds.

However, under the facade of a vertical regime, there are things that move. The fall in oil prices has prompted Ilham Aliyev to undertake some reforms to diversify an economy dependent on hydrocarbons and to institute a more agile bureaucracy that prevents corruption and facilitates the opening of businesses (the World Bank itself has recognized this).

Some oligarchs have fallen from grace and others have had their power reduced. “These reforms should not be confused with political liberalization, they are aimed at making Azerbaijan’s economy more attractive. They mean the passage from an oligarchic system to one more centralized in the Executive ”, writes the expert Svante E. Cornell.

Aliyev’s term ends in 2025, after several constitutional reforms to prolong his power. “He is at the peak of his glory, and from now on the management of everything will be more complicated. Therefore, he could make way for others and remain a hero, “says a diplomatic source.

His natural heir would be the current first lady, Mehriban Aliyeva, vice president of the country since 2017. This appointment could be seen as the patrimonial gesture of an autocrat, when in fact it has more to do with palace fights.

“There have been rumors for years that Mehriban Aliyeva would form her own party to run for the elections, but it has never happened. The explanation is that there was an agreement between the Aliyev and Pashayev families, according to which she would not stand in the elections, but would be given more power, ”says Geybulla.

The Pashayev family, from which the first lady comes, is the most “influential” and “greedy” in the country, says another source: it controls the country’s first bank, food import companies, media, telecommunications, hotels, the Most contracts of the Ministries of Culture and Tourism.

And indeed, within the reforms of recent years, part of the clique of elderly bureaucrats that had been in office for more than two decades – the prime minister, the interior minister, the chief prosecutor, among others – have been replaced by younger technocrats, trained abroad and loyal to Mehriban Aliyeva.

“It is curious that, in the public opinion of Azerbaijan, while the president is seen as the tough face of the Government, she has a more human image, as a person who cares about children, culture …, despite that seeks the continuity of the same clientelist system. Perhaps better managed, but not democratic, “says the Azerbaijani journalist.