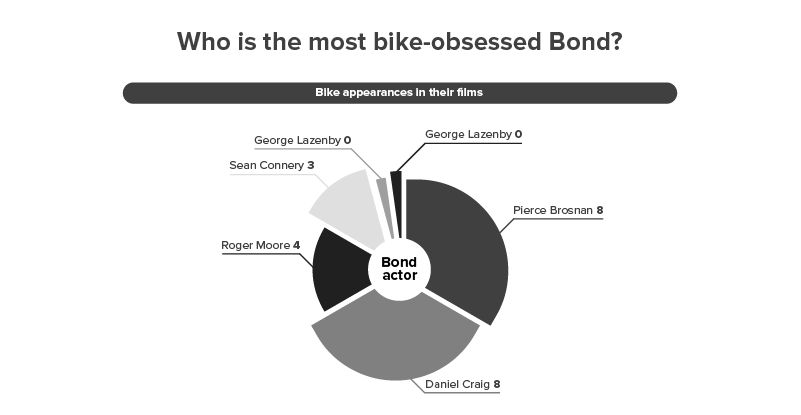 James Bond might be best-known for his flashy cars, swanky watches, and stylish gadgets – but the world’s most famous secret agent actually has a lesser-known taste for two wheels.

New research from Vertu Motorcycles has revealed that the 007 film franchise has revved-up its use of motorcycles in recent years – and Daniel Craig has enjoyed bikes more than any other Bond.

Craig will jump on a Tiger 900 and Scrambler 1200 during his final outing in No Time To Die – which arrives in movie theatres on September 30.

Research also revealed that bike usage in the Bond series has increased over time.

Pierce Brosnan really took to these vehicles during the nineties, with the presence of motorcycles nearly tripling across the decade.

Brosnan boarded eight bikes overall – a feat which will only be bettered by Craig when he rides his ninth and tenth motorcycles this month.

When it comes to motorcycles, the agent has shown a preference for Japanese models overall – riding Yamahas, Suzukis and Kawasakis.

According to Vertu, nearly half of all motorcycles in Bond films have been made by Japanese manufacturers.

German BMW bikes also featured prominently (with four different models appearing in the 007 movies), whilst four British-made bikes have been used by Bond – including three Triumph vehicles and one BSA.

A Vertu Motorcycles spokesperson said it was “positive” to see Bond’s taste for motorcycles increasing.

They stated: “Not only does this help to shine a light on the impressive A-list appeal of a good quality motorcycle to viewers, but also that you don’t need to simply shop for speed to turn heads.

“Bond’s preference for Honda motorcycles shows us how varied he is in his bike selection. However, we are certain that the two new British-made Triumphs that are due to appear in the upcoming film are going to draw all the headlines.”